Since December 31, 2021, when Professor Davide Tutino began a long hunger strike (video IT) to restore human and constitutional rights in Italy, dozens of other Italian professors and citizens, including from the intellectual world, have joined his fast, which has continued in relay form ever since.

At the 18th day of hunger strike Professor Tutino has passed the baton to Nino Fusco, National Secretary FISI Firefighters, already protagonist of a hunger strike with permanent garrison in front of the headquarters of Rai – Radiotelevisione Italiana in Naples from December 10 to December 22, 2021.

The hunger strike, meanwhile, is spreading throughout the country, with adhesions and support from the world of culture:

Davide Tutino has been joined not only by his comrades from Resistenza Radicale (www.resistenzaradicale.org) Claudio Rossetti FISI referent for the Marche region, Professor Sergio Porta, professor at the University of Glasgow, writer Carlo Cuppini, pedagogue Licia Coppo and even Andrea Severini, political activist and husband of the former mayor of Rome, Virginia Raggi. And still others will join in.

Also professor Saverio Mauro Tassi of the Einstein High School in Milan joined this remarkable relay. He is against the DAD (distance education) measure for the unvaccinated, despite being vaccinated himself. He defends the value of equality among students and the right to study against the green pass and super green pass, that are now driving a wedge between the students and in Italian society in general.

The philosophy teacher’s battle against DAD to the non-tri-vaccinated. In the classroom sanitizers, distances and Ffp2: lip and facial expression crucial to teaching.

He deviced the idea of the white strike (video IT) and professors “conscientious objectors” against putting non-vaccinated in DAD (after the third positive in middle and high school). When the case comes up, his “non-lessons” switch to his channel of Cine-Philosophy online for everybody. In fact, today Saverio Mauro Tassi, a professor at the Einstein High School in Milan, also begins a hunger strike.

Why?
“It’s always to demand the withdrawal of Article 4 of the January law decree, which is unconstitutional. To support the declaration of equality with the collection of signatures on Change.org, since what I have done so far is not enough. To denounce the penalization of the ‘ConDaddati’ (the condemned with italian word play) as I call them. But also because some of my colleagues have told the principal that I don’t wear a mask while I’m explaining…. I always wear it, let’s be clear, in the corridors and also outside. I am tri-vaccinated.”

Saverio Mauro Tassi is teacher of philosophy, history and civic education at the Liceo scientifico statale Einstein in Milan with 40 years of service and retired at the end of this school year (67 years old).
In his own words:

“Following the enactment of Decree Law 1/22, I took action for the respect of the Constitution first with a white strike (suspension of programs and non-lessons on the Constitution), then with a hunger strike, then with symbolic occupations of my school (from which I was evacuated after two nights and almost 3 days by 5 Digos agents – special police forces) and the USR (Ufficio Scolastico Regionale) Lombardy in Milan (suspended after a few hours because the director general agreed to talk to me and listen to my request), but especially by promoting the birth of the association SCUOLA UGUALE X TUTTI (currently more than 1200 members) and the subscription of the online petition NO TO THE DAD FOR STUDENTS WITHOUT GREEN PASS (to date more than 6. 700 signatures) and the petition NO TO DISCRIMINATION IN SCHOOLS (2,800 signatures so far, initially proposed by a group of teachers from Treviso, then adopted by SCUOLA UGUALE X TUTTI), as well as the organization of two sit-ins, one in Milan on 12/2, near the Provveditoreato, and one in Rome on 20/02/2022.” 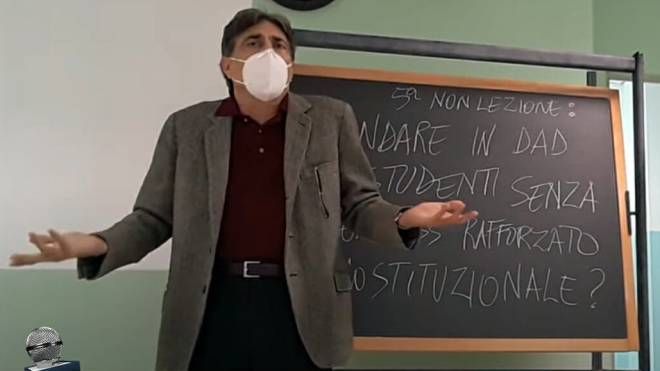 Lawyer Frida Chialastri on Florence’s verdict – NO PAURA DAY 3 Monza (IT►EN/ES/NL)
"The vaccines are dangerous": this is how the judge of Florence reinstates the "no-vax" psychologist (Corriere della sera). The news was a bombshell for all the followers of the WEF, WHO and Agenda2030.
15 views

Understanding the Manipulation of Masses, summary for the Cratesiology course – Prof. Pacini (IT)
The science of power, propaganda and manipulation of the masses, Cratesiology, is a tool to learn how to dismantle conspiracies and understand how the mechanisms of power work.
47 views

Make Europa a Community Again!
Their Great Reset for corporations could well turn into our Great FREEset for the people instead, which actually could lead to Make Europe a Community Again. And this time maybe even for real.
10 views

NEXT – four young dutch people traveling QR/’green’-pass-Europa
On our trip trough Europa we are going to capture the revolution that is NOW taking place to raise the collective consciousness, with transparent and truth based content.
5 views

Brussels: more than 100,000 people for Freedom of Choice and Liberty
The awakening is unstoppable.
4 views

Australia Imprisons Novak Djokovic Tennis Champ. (EN)
Novak Djokovic has been imprisoned by the Australian government. His father said that Novak is a prisoner and a hero to all people worldwide who value FREEDOM.
5 views

Brussels Covid/QR-pass protests 23/01/2022 What Really Happened | Janet Ossebaard
The TV wants to label Freedom of Choice people in Bruxelles as violent, when it was a completely peaceful demonstration by freedom loving people.
5 views

Lithuania meets Latvia! ♥ Students/youth.
We are pleased to announce the meeting of two student delegations from Lithuania and Latvia. Together we are stronger! 💥🔥💪🙌
6 views

A cry for help from Italian students (EN)
Italy seems to be on the frontline of the European Covid "green"-pass social experimentation.
14 views
12»